In an interview with British newspaper The Sun On Sunday, UK prime minister Boris Johnson said doctors had “contingency plans” ready in case he died while in intensive care after contracting coronavirus.
“It was a tough old moment, I won’t deny it,” he told the newspaper, speaking for the first time in detail about his illness. “They had a strategy to deal with a death of Stalin-type scenario…The doctors had all sorts of arrangements for what to do if things went badly wrong”.
Johnson, 55, spent three days on oxygen assistance in intensive care while being treated for COVID-19.
Read the full story here: https://www.euronews.com/2020/05/03/uk-pm-says-contingency-plans-for-his-death-were-ready-as-he-recalls-coronavirus-ordeal

More than half of Russia’s new cases were in Moscow, where concerns are rising on whether the capital’s medical facilities will be overwhelmed.

The country has so far reported more than 124,000 cases and over 1,200 coronavirus-related deaths.

US Secretary of State Mike Pompeo said there was “significant evidence” that coronavirus originated from a laboratory in the Chinese city of Wuhan, the first epicentre of the pandemic.

Pompeo made this statement on ABC, declining to comment on whether he thought the virus had been intentionally released by Beijing.

‘He strangled me in front of my child’

Before the COVID-19 quarantine there was already a severe shortage of centres and refuges for women in need of an escape from domestic violence. But the pandemic has only made things worse there. In April, La Strada-Ukraine, a phone line for victims, received 2,754 calls on domestic violence, compared to approximately 1,590 in March. The quarantine started on 12 March, and they had 1,273 calls in February and 1,203 in January. Euronews spoke to one victim who was lucky to escape from her abusive husband alive. Watch in the video player below. Full story here: https://www.euronews.com/2020/05/03/he-strangled-me-in-front-of-my-child-quarantine-compounds-ukraine-s-domestic-violence-pro

British firm Rolls-Royce is planning to cut up to 8,000 jobs in the wake of the collapse of air traffic. “The impact of Covid-19 is unprecedented. We have taken swift action to increase our cash flow, drastically reduce our expenses (…). But we will need to go further,” a group spokesman said, adding that discussions were under way with the unions and that decisions on jobs should be announced by the end of May. The famous car maker is a crucial manufacturer of aircraft engines. 03:48 م

Spain recorded 164 deaths in 24 hours on Sunday, the lowest daily figure for almost seven weeks. The figures come out a day after a relaxation of confinement measures in a country that enforced some of the stricted in Europe as it tried to deal with the spiralling outbreak. Ministry of Health figures show the total number of deaths due to the pandemic is now 25,264, making Spain the fourth in the world for deaths after the United States, Italy and the United Kingdom. 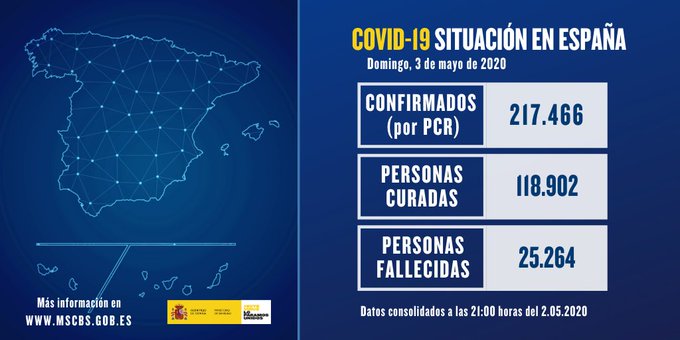 The number of deaths in the last 24 hours is the lowest since March 18, when 107 deaths were recorded. But this figure should be interpreted with “caution” because the transmission of death figures by hospitals is traditionally slower during long weekends such as the one on 1 May, warned the director of the Health Alert Centre, Fernando Simon. “The figures are very good and confirm the trend observed. We have to see if they are confirmed in the coming days,” he said at a press conference.

France has extended its state of health emergency, even as it prepares to loosen some of its coronavirus lockdown measures on May 11. The state of emergency, initially declared on March 22, will have new measures, to be announced on Monday, the health and interior ministers said. However, as of May 11, shops are still scheduled to reopenand people will finally be allowed out of their homes without having to carry a self-certification. Read the full story here: https://www.euronews.com/2020/05/02/what-does-france-s-covid-19-health-emergency-extension-mean

EU leaders have pledged to raise billions of euros to go towards the global fight against coronavirus. Saying they are supporting the World Health Organizations call for joint action, the leaders announced the launch of an Access to COVID-19 Tools Accelerator, a “global cooperation platform to accelerate and scale-up research, development, access and equitable distribution of the vaccine and other life-saving therapeutics and diagnostics treatments.” On Monday 4 May they plan to raise an initial 7.5 billion euros in an online pledging conference – funds that are only the start of what is needed to take on COVID-19, they said. In a statement, the leaders wrote: “If we can develop a vaccine that is produced by the world, for the whole world, this will be an unique global public good of the 21st century. Together with our partners, we commit to making it available, accessible and affordable to all.” Signatories were: Charles Michel, President of the European Council; Ursula von der Leyen, President of the European Commission; Giuseppe Conte, Prime Minister of Italy; Emmanuel Macron, President of France; Angela Merkel, Chancellor of Germany; Erna Solberg, Prime Minister of Norway.

The UKs prime minister Boris Johnson has told a newspaper how he was given “litres and litres of oxygen” to keep him alive, as he was treated in intensive care for COVID-19. In an interview with the Sun on Sunday, Johnson revealed there were “contingency plans in place” for if he didnt recover from the disease. “The doctors had all sorts of arrangements for what to do if things went badly wrong,” he said. “It was hard to believe that in just a few days my health had deteriorated to this extent. I remember feeling frustrated. I couldnt understand why I wasnt getting better. “But the bad moment came when it was 50-50 whether they were going to have to put a tube down my windpipe. “That was when it got a bit . . . they were starting to think about how to handle it presentationally.” In a roller coaster couple of weeks, the prime minister recovered enough to witness the birth of another child. He is now back at work.

The UK recorded 621 new Covid-19 related deaths in the past 24 hours, bringing the total death toll to over 28,000 in the country, Housing, Communities and Local Government Secretary Robert Jenrick announced.

The UK is now the third hardest-hit country in the world in terms of coronavirus-related deaths, behind the United States and Italy.

The Truth About How Much Money Gigi Hadid Makes

These Photos Are Proof That Halima Aden Is a Style Icon Both On and...

Can beauty campaigns ever truly be empowering?